On the 24th September 2018, myself and Paul attended the Labour Party Conference in Liverpool, on behalf of the 3 Nations Dementia Working Group.

It was a slow start trying to get MPs & Councillors to come and talk to us, as they were all in the main area which unfortunately we had no access to.

When they did initially come, I felt as though some were paying lip service to what the girls from the Alzheimer’s Society and myself were saying, so I thought we need to tell them some home truths and really tell them what myself and most of my peers feel. So I told them due to the worry and stress about my future care that maybe I, and many of my peers, would buy a one way ticket to Switzerland, rather than put our families through the stress and heartache of wondering where the next money to pay for the care is coming from, and if they would still have a home to live in and to leave for their children. 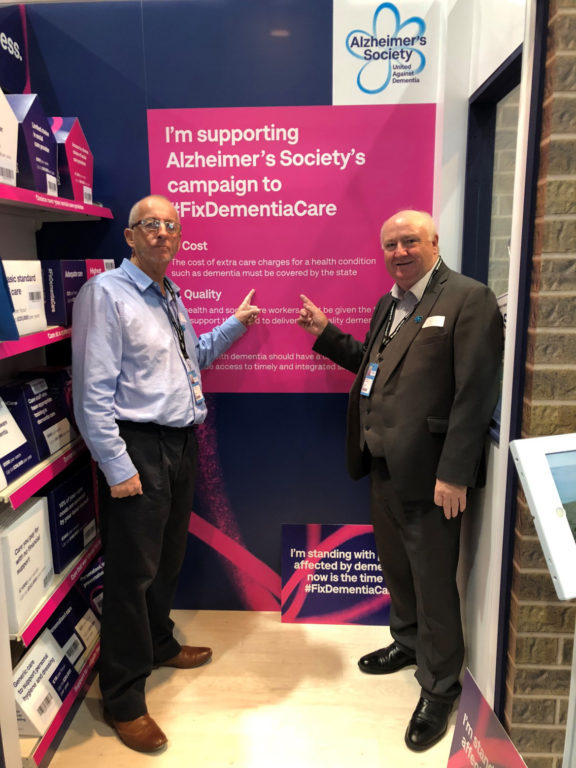 People are facing catastrophic costs to pay for their care and support, whereas if they had cancer or another medical condition people would be falling over themselves to provide help and assistance.

People when they need the care in the first place struggle to access vital care, there are barriers put in place everywhere we turn.

When a Person Living With Dementia (PLWD) does receive support, their care is often poor quality. It’s as if those that provide this second rate service are of the opinion that a PLWD does not need good care because “They feel nothing”. So it would only be a waste of good money.

It’s a terrible thing to have dementia but why should I be treated any different from a person that has cancer or another life-threatening disease?

It’s stressful enough having dementia without the daily worry of how my family is going to cope. Will they have to forfeit so much of our income and our home?

The prospect of putting them all through this really makes me think, would they be better off if I was dead now?

Every one of my peers would love to live at home and see out our days with our loved ones, but our Carers get little to no help and support. In fact, society looks at family Carers and expects them to just get on with it and stop bitching.

There is no respite for the family Carer and the sad thing is a lot of family Carers are the young; people still at school who should be enjoying life, not having to give up theirs to be a Carer.

Some of us can’t afford basic adaptations such as a bed sensor which could give Carers a chance to have a proper sleep instead of having to sleep with one eye open.

Furthermore, as soon as any equipment has the word dementia attached to it, its price goes up a 100 fold.

It’s time to end the inequality and deliver the change that people living with dementia deserve.

I told MPs that we want to see action on:

1) The cost of extra charges for a health condition must be covered by the state;

2) Quality – All health & social care workers must be given training and support; they need to deliver quality dementia care!

3) Access – every PLWD should have a care navigator to support access to time.y, preventative Andy integrated support.

We are going to have mega problems in the future with family Carers because we are sitting on a ticking bomb. This is due to the stress and the burden that is being placed on them, many of whom are struggling to juggle working, looking after a family and being a family Carer for a PLWD.

Employers do not have an understanding about dementia, and what the additional stress and pressure of being a Carer is. I mean, even some GPs have little understanding of dementia; so what chance have Carers got in getting help and empathy from friends, work colleagues, businesses?

Who’s going to understand when that Carer starts to have a breakdown; how can a Carer sleep at night with the work of the PLWD and the fact that sooner rather than later they may have to put their loved one into care and all the associated costs that go with that?

This is exactly what is going to happen to our family Carers, for want of not helping them. There are over 850,000 people currently diagnosed with dementia and this could just be the tip of the iceberg. A third of these live alone; who is going to ensure that these people get the care, dignity and respect they deserve?

We’ve all seen and heard horror stories about care homes. In fact, being put into care home and being mistreated is one of the biggest fears of myself and my peers.
If something is not done now, then the cost to the NHS through poor health, inappropriate hospital admissions, lengthy stays and delayed discharge will be astronomical.

We are asking MPs to take steps to ensure that close to a million PLWD in Great Britain are not accessing the convention of the rights of Persons with disabilities, despite the fact that CRPD Article 1 and the UN policy statements about people with cognitive disabilities are Rights holders on the same basis as people with other disabilities.

We want and need inclusive, state-funded post diagnostic support for everyone.

We have worries about The Bill on Mental Capacity and Liberty Deprivation, which we believe will take Disability Rights backwards.

The Bill will make it easier to restrict the freedom of people in care settings who lack capacity to make their own decisions.

The Bill is based on recommendations by the Law Commission, but is significantly different from the Commission’s own draft bill and omits most of its most progressive elements.

This bill would have serious impact on the Human Rights of disabled people, and would significantly weaken the few existing protections disabled people currently have.

We also asked MPs for a simple, universal way of contacting them.

We asked for an annual visit by PLWD to Parliament to give updates to the relevant Minister of Health (if it can be arranged) to lobby our cause and keep him/her informed of our cause.

We asked them to lobby for a greater share of NHS funds for dementia.

We also want a wider recognition by Trade Unions to understand the issues of PLWD in the work place.

We also told MPs what the 3NDWG is about, and the work that we do.