Julia Powell’s mother June is living with dementia, which has had a huge impact on them both. Here, she tells us about their journey with dementia so far.

When my mother had several mini-strokes in October 2015, our lives were turned upside down. At 80, mum was independent, living on her own in South Wales, socially active and still driving her car. I was living miles away in Brighton, and my full-time job, which I loved, involved frequent travel to far-flung places. Since my dad died in 2012, my husband Jack and I visited mum more often, and had holidays together twice a year. 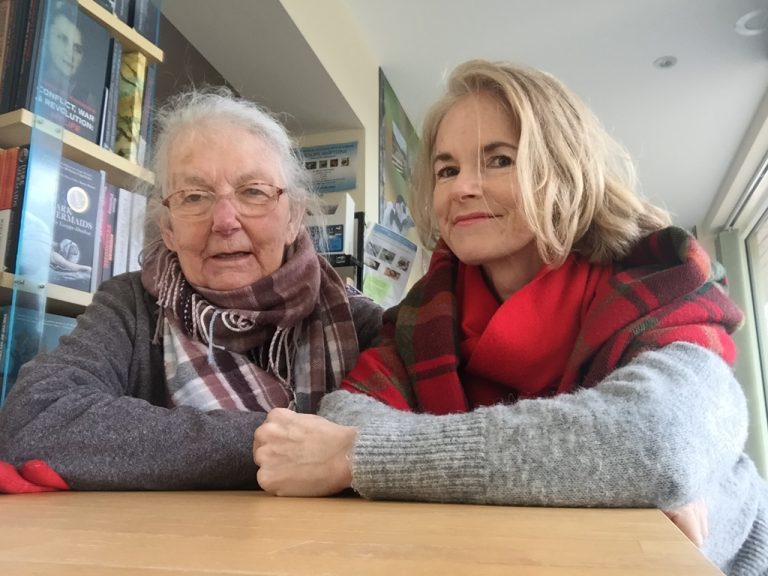 June Powell with her daughter Julia

I was staying with mum on the morning she no longer recognised her home of twenty years. It was after the third in a series of mini-strokes. She asked me if I was the mistress of the house, making me wonder if she knew who I was. We were both bewildered and frightened about what was happening. I took mum to hospital where she stayed for six weeks.

It made no difference to my employer in New York where I was based, so I continued to work from mum’s home in order to visit her at the hospital. After six weeks, it was clear that mum could no longer live on her own. Her fluctuating memory, loss of bearings and high levels of confusion meant that she would need 24-hour care. A care home seemed the only option.

My sister found a lovely new care home in the valleys amidst beautiful trees and with gorgeous views. The management were happy to work closely with us developing a care plan and getting staff to follow it.

Mum wanted to kill herself

When not travelling for work, my husband and I stayed in South Wales as often as we could, so I could visit mum. She never settled. In the first year, mum became depressed and often talked about killing herself. She was put on suicide watch. Mum frequently told me how unhappy and scared she was.

Often when I arrived at the care home mum burst into tears. She told me she didn’t want to stay at the home. The staff were nice and caring, but mum never stopped feeling that she was a stranger. My gentle and frail mother used physical force, kicking and shaking doors, in her attempts to get out. One time she hit a member of staff who tried to stop her. In two and half years, she managed to escape the secure home four times. On one occasion she got as far as the road. Thinking she was being imprisoned, she wondered what she was being punished for.

My mother’s distress broke my heart. Normally healthy and fit, I got ill three times over the 14 months following mum’s first stay in hospital. I had two infections that resulted in sepsis and hospital admissions. After the last 10-day stay in hospital, I learnt that my work contract wouldn’t be extended. Jack and I agreed I would use the time to focus on mum, until she was more settled. It meant more time in Wales, and away from Jack.

After another year and a half, and much anguish, I decided I would look after mum at her home while I worked out her next move.

A year with mum at her home

At the very least, I hoped mum would be happier knowing she was home with family (me). It didn’t work out like that. Mostly mum doesn’t recognise her home, at times thinks it’s a care home, and often she wants to go to her real home. Mum seems most relaxed when she knows I’m her daughter. It’s also OK if she thinks I’m her sister, a friend or one of the better carers. Sometimes, when she’s anxious or angry, I become a stranger, a colleague or the “person-in-charge” which aren’t so good.

Generally, she feels safe, but not always. The most significant improvement is that in this last year she hasn’t felt imprisoned and hasn’t talked about killing herself. She hasn’t had the distressing emotional meltdowns that she experienced in the care home. But she does still get very anxious, especially late in the day. She often can’t settle at night, which means neither of us gets much sleep. I find nights the hardest.

I’ve had amazing support from social services including two night-sits a week where a carer takes over from 10 pm until 7 am. I also get breaks three days a week, and two days where mum goes to a day centre. I’m conscious that so many other carers are on their own without any support. I know I couldn’t look after mum without time to recover and pursue my own interests. Nevertheless, the long absences from Jack have taken their toll, and I fear my job prospects are diminishing with the passing of time.

Plans for the future

I plan to return home to Brighton in July, where I will resume my regular life (hopefully new job and old husband) and visit mum when I can.

I’m now looking for a good care home; one that provides adequate dementia care training to all its staff, values them, is well run and local. I am working on a new care plan based on what I now know. Mum and I are working on her Life Story Book  and I’m looking for a music therapist to identify tracks that calm and resonate with her.

I know I’ll miss mum and will worry about her. We’re closer now than we’ve ever been.

If she is settled and content in her new surroundings, I will be able to get on with my life. I know that’s what mum would have wanted for me. She wouldn’t have countenanced me giving up so much to care for her. It’s been very difficult at times, perhaps the most challenging thing I have ever done. But I wouldn’t change a thing – except perhaps the dementia!

Julia Powell writes a blog about her efforts to improve the wellbeing of her mother who lives with mixed dementia.